For a moment it seemed like she hesitated. “There is a way,” she whispered at last. “A Braxaná custom you can invoke. I researched it. It’s called the Wilding. Do you know it?”

Have you ever read a sequel and then asked yourself, simply, “why?” Indeed, that is the question here. Why did Friedman, seventeen years after writing the quite solid In Conquest Born, choose to follow it up with a piece of work that seems so weak compared to the original? Was it pressure from fans to write again in the same universe? Did she feel there was unfinished business to attend to? It doesn’t seem to me that there were any loose ends left at the end of the first novel. Was this simply an attempt to recapture past glory, or a nostalgic effort to revive a cherished accomplishment? Whatever the case, I’m sorry to say I didn’t care much for The Wilding. I know Friedman can write better than this, so it’s a shame she spent some portion of her energy on such an unnecessary and disappointing sequel.

I won’t delve into the details all that much. The story takes place a couple hundred years after the events of the first book. The Braxins and Azeans are still engaged in their perpetual war. Both societies have undergone some changes, but the basic situation is still the same. Except that the remaining telepaths have scattered to parts unknown and are now distrusted by everyone. One piece of the plot involves an Azean’s quest to find the hidden psychic community in search of a long-lost sister. Another piece involves a Braxin’s mission (the “Wilding” of the title) to find new genes to refresh the dwindling Braxaná genetic pool, and to avoid execution at the hands of his enemies. These two characters meet up and find their quests are leading them to the same place. Of course there are numerous other characters in the mix. There is much traveling, scheming, fighting, death, and general adventure. The end.

OK, I’m making it sound terrible, and it’s not, really. It’s just that I didn’t feel any of the spark I got from the earlier book. Nothing about this story made me feel it really needed to be told, and nothing about the way it was told really compelled my attention. The characters were less vibrant, the plot was clumsier, and the entire style was less stimulating. So to anyone out there who has read and enjoyed In Conquest Born, I’d advise against expecting the same quality level from this follow-up. As sequels go, I have to say I’ve read better ones.

WWHG.” ‘Offer refused.’ Refused! REFUSED! I knew it!” Reich shouted. “All right, D’Courtney. If you won’t let it be merger, then I’ll make it murder.” 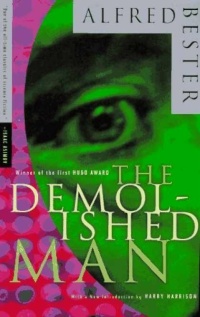 I’m happy to say I’m all caught up on essential Bester. Last year I had the pleasure of reading The Stars My Destination, and now I’ve finished the other of Bester’s two novels of great renown, The Demolished Man. Personally, I enjoyed Stars a good deal more and consider it the superior of the two books. However, as Bester’s first published novel and the winner of the very first Hugo award, The Demolished Man is certainly worthy in its own right. Like Stars, it presents a tale of personal obsession and vengeance set against the backdrop of an evolving humanity that has acquired an astounding new ability — in this case, telepathy.

Perhaps part of the reason I liked the other book more was that Gully Foyle is a much more sympathetic character than Ben Reich. Although both of them pursue their quests with little regard for the laws of society, at least Foyle, one may feel, was somewhat justified in his actions; he was wronged in some way. Reich, on the other hand, comes across as simply an arrogant, greedy, super-rich bully throwing his power around to get what he wants. It is interesting, though, that these two preeminent works of SF both involve such “bad boys.” Bester seems to have a rather high opinion of these rebels:

But it [capital punishment] doesn’t make sense. If a man’s got the talent and guts to buck society, he’s obviously above average. You want to hold on to him. You straighten him out and turn him into a plus value. Why throw him away? Do that enough and all you’ve got left is the sheep.

Actually that short quote offers a lot worth thinking about: rebellion and individual initiative versus social conformity, as well as punishment versus rehabilitation. Speaking of punishment, Bester had me wondering throughout the novel just what “demolition” was — sinister name, that. Surely I can’t be the only reader who expected it to be some sort of matter annihilator that criminals were thrown into, or some such? Bester certainly built up my “apprehension” with that.

One of the more interesting aspects of the book, of course, is its portrayal of what society might look like with a sizable percentage of telepaths among the population. Bester’s Espers number in the tens of thousands, if I recall correctly, and have become entrenched in all major areas of life: business, medicine, entertainment, government, the judicial system, and so on. This would no doubt have far-reaching effects on the world, not the least of which is that deception and crime of all varieties would be much more difficult to get away with (much to Reich’s chagrin). Telepathic ability is mostly presented in a positive light here, as a potential force for good and for humanity’s improvement. However, there is also the possibility for exploitation, and the existence of telepathy doesn’t magically erase all of mankind’s characteristic flaws. The police Esper Powell reflects on this (angrily) during his dealings with the entertainer and brothel owner, Chooka Frood:

It was anger for the relentless force of evolution that insisted on endowing man with increased powers without removing the vestigial vices that prevented him from using them.

I really enjoyed the battle of wits between Reich and Powell, with Powell trying everything he can think of to prove Reich’s guilt, and Reich doing everything in his power to foil him. The book flies along at a relentless, breakneck pace, true to form for Bester. I can’t say that every part of the story works for me, or that it’s my favorite from this author, but it is classic Bester, no doubt about that, and worthy of attention.

Simmons satisfies with The Hollow Man

After experiencing (and loving) Dan Simmons’ take on space opera as displayed in his Hyperion Cantos, I was looking forward to delving into some more of his work, and it didn’t take me long to find some. The Hollow Man (1992) recently caught my attention at a used bookstore, and reading it has only added to my growing admiration for Simmons. This novel is very different from the Hyperion stuff, and takes place much closer to home. It’s a mysterious SF suspense thriller (think Dean Koontz here for a general idea of the style), and Simmons seems just as comfortable with this type of story as he is with the grand arena of space opera.

Jeremy Bremen has an exceedingly rare gift: telepathy. Only it’s more of a curse, as the incessant noise of thoughts from other people can be maddening. However, he has been extraordinarily lucky in finding another telepath and gaining some relief. For the last several years he and his wife Gail, using their abilities together, have been able to shield each other from the “neurobabble” of the surrounding world. When his wife dies, though, that protective mindshield is gone, and Bremen is once again subjected to the torment of his accursed ability. As his life is turned upside down and he struggles with his affliction and loss, Bremen begins a downward spiral into emptiness and despair. As the darkness within him deepens, he burns his house and starts a cross-country journey that will bring him into confrontation with other sources of darkness and violence, including a serial killer, a rapist, and other criminals. During his long, dark night of the soul, Bremen himself sometimes engages in questionable or illegal behavior. Yet through it all, there are moments of kindness and glimmers of hope, and the feeling that Bremen has some greater destiny to fulfill.

Besides the theme of telepathic anguish, the book also revolves very much around a shocking discovery involving a new understanding of the nature of reality. This is based on some of the more fanciful implications of quantum mechanics, and Simmons also draws on chaos theory, fractals, strange attractors, and the like, tying all these together to come up with a suitably bizarre and mind-blowing explanation for the novel’s strange events. To be honest, I’m not sure I even completely understood the model of reality being put forth, or if it made any rigorous kind of sense; but I was relieved to see some kind of scientific explanation being attempted, rather than leaving it to the realm of the supernatural.

Simmons reuses here some of the elements and stylistic flourishes also used in his Hyperion books. For example, he likes to make reference in his fiction to real science fiction writers. In this case, two of the characters discuss Alfred Bester’s The Stars My Destination, using the “jaunting” concept as an analogy for another process. Simmons’ interest in poetry is also evident here. As with Hyperion, the title of this book is taken from a real poem; in this case it’s Eliot’s “The Hollow Men,” of course. It’s an appropriate title, for the novel shares that poem’s sense of gloominess. The chapter titles are taken from the poem as well. Also used is the very sad “Elegy for Jane” by Theodore Roethke.

While the strange discovery about reality that lies at the center of this novel may come across as a bit flaky, the book still succeeds very well on the strength of the characters and their emotional turmoil, and on the deep sense of urgent mystery that propels the story along. It’s an engaging tale of loss and redemption, of both the pain and the wonder of life, and of people just trying to make some sense out of it all. On that level The Hollow Man comes across as anything but hollow. And the more I read Dan Simmons, the more I like him.